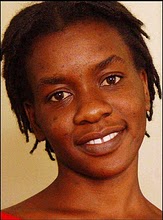 Mirirai Moyo, a promising emerging writer from Zimbabwe, is one of the winners of the 2010 Golden Baobab Award, which features African stories for children anywhere. Moyo is not new to awards. In 1996, she was the Harare Region Winner for the Randalls National Essay Competition. Her short stories have featured in The Sunday Mail, Fascinating Tales and Parade as well as Drum Magazine’s fiction segment. Her radio play, Belonging, was awarded Honourable Mention in the BBC African Performance 2008 and published in Rory Kilalea’s collection In the Continuum and Other Plays (Weaver Press). What I find fascinating so far is how Mirirai Moyo features animal characters in her stories to deal with the realistic issues that concern humans. As the interview below shows, Moyo appreciates the power of the traditional story-telling tradition, but she puts a new twist to her story-telling to address contemporary issues affecting humans everywhere.

I got in touch with her and she agreed to do this brief interview. Enjoy.

1. What does winning the Golden Baobab Prize mean to your career?
I want to believe that this will be the beginning of more (I’ve had a few already) beautiful things/ experiences for me as a writer such as- naturally- being read more. And the recognition I’ve been given encourages me to keep at it (telling my stories).

2. Your bio shows that you are from Mberengwa. How has your home influenced your writing?
While I am from Mberengwa (was born there) I was raised a city girl, doing my growing up in the various areas in Harare we moved to as a family. The moving between ‘homes’ influences me more as writer rather than having stayed in any one specific place.

3.Who are your writing influences?
I find it extremely difficult to speak of influences because as an avid reader, titles and writers have flitted through my life depending on the phase (I’ve been in).

4.I listened to the BBC recording of your play “Belonging” and I was moved. What influenced your decision to use animal characters in your writing?
Thank you for the compliment on Belonging. I’m glad you liked it. Animals just seem to make for more flexible story telling; they make for delightful metaphors- something our ancestors discovered way back in the Stone Age… Animal characters give me room to be adventurous in exploring issues of interest with a twist.

5. What is your award-winning short story, Diki, the Little Earthworm about? What inspired it?
‘Diki: The Little Earthworm’ is a feel-good narrative, promoting self-acceptance and self -love. The story aspires to impart a lesson in the importance of self-belief. What better protagonist for this moral than an earthworm, one of the simplest but nonetheless essential of creatures in the universe?

The idea is built on the premise that a child’s sense of self-worth determines his/her interactions within the community. A healthy sense of self-worth ultimately enhances sound and responsible personal and social habits. And every society needs well-grounded and open-minded leaders of tomorrow.

6.What do you think of the state of Zimbabwean writing?
My greatest lament is the Zimbabwe government could and should be doing a whole lot more to improve the state of writing in Zimbabwe. Too many stories are going unseen, unread, unheard. The government seems to have a strong bias towards investing in sports. How many hundreds of thousands of US dollars did they throw at hosting Brazil on the eve of the World Cup again? My point exactly!

Sacramento-based Stories on Stage will feature stories by African writers on June 24, 2011 at the Sacramento Poetry Center. Valerie Fioravanti, founder and coordinator of the reading series, has asked me to recommend African writers who are interested in submitting their stories for this special feature. I think it is a great opportunity to create more awareness of African fiction and for Northern California readers to discover the diversity of African writing. The stories are read or performed by professional actors.

Here is what Valerie is looking for:

“Two stories will be featured at each event, one from a writer with a short story collection or equivalent publication history, and one from an emerging writer. An emerging writer need not have previous publications in order to be selected. To submit a story for possible inclusion in the series, email your story as an attachment (.doc or .rtf only), and include a brief bio and publication history, if applicable. Please submit only one story, between 1000-4000 words. I am looking for stories that work well when read aloud, and not all short stories make a smooth transition off the page (this is true of some of my best stories. If you’ve never read your work aloud, I recommend a test run before you submit). Short stories only, please. No novel excerpts, essays/memoir, short plays/scripts, or monologues will be considered…” Email stories to valfiora[AT]yahoo.com and cc manu@munyori.com

The Sacramento Poetry Center is based in Mid-town Sacramento. It presents poetry readings every Monday and short story readings every last Friday of the month. The Stories on Stage has been running for a year and it has helped bring high-quality fiction writers and performers to the SPC.

“I write fiction, essays, and prose poems. Stories from my linked collection, Garbage Night at the Opera, have appeared in North American Review, Cimarron Review, Hunger Mountain, Night Train and others. These stories have received four pushcart prize nominations and Special Mention in Pushcart Prize XXVIII. I received a Fulbright Fellowship in Creative Writing to work on a novel set in Italy, Bel Casino, which is one of two novels currently in the works. My essays and prose poems have been published in Eclectica, Silk Road, Puerto del Sol, International Living, and others. I live in Boulevard Park in midtown Sacramento, where I run the Stories on Stage reading series and Midtown Writing Workshops.”

Visit Stories on Stage for more details on the series.